Having met in Ripley our rather large group pretty much filled the bus which took us to Crich market place from where Trevor Griffin, mastermind of the Butterley Gangroad Project, was to be our guide for the Gangroad section of the walk. The project gained HLF funding to interpret and disseminate information about the railway, the associated quarries and limeworks and investigate the tunnel, providing a more accurate picture of the railway.

Butterley Gangroad was first used in 1793 by Benjamin Outram & Co to transport limestone from Warner (Old) Quarry to the Cromford Canal at Bullbridge. During later improvements the line was straightened and connected to Hilt’s quarry. The walk closely follows the route of the Gangroad and many of the landowners are very supportive of the project, which became obvious as the walk progressed.

The route starts at the gates of Hilts quarry which is now owned by Rolls Royce and which they have used as a dump for low level nuclear waste, generated from their building of reactors for powering nuclear submarines. From here we walked down a 1 in 15 gradient which was originally a self-acting double track incline, singled in 1894 for use by locomotive power.

At the bottom of the incline the Hilt’s Quarry branch joined the original gangroad. Climbing over a stone stile, we stood on the original line and then walked down to the road crossing which was originally a tunnel under the road. Here the cottage (now called the engine shed) has a good deal of gangroad memorabilia in the garden including a patio supported on the iron beams taken from the roadway bridge when it was demolished. 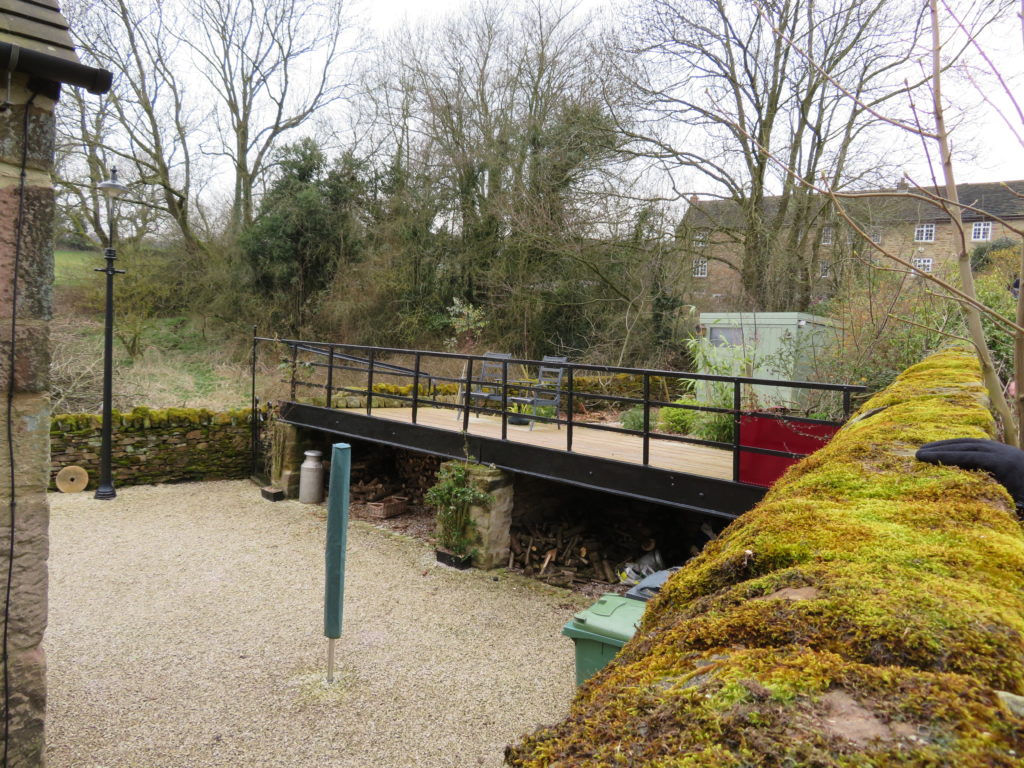 Opposite this is a large building, now private houses, which was the hat factory and workers cottages. It is believed that the factory would have been making miners hats.

We soon left the road and cut up through a field from where we viewed an embankment which is part of the new line, constructed when the tramroad was converted to a steam hauled railway, running between stone walls. 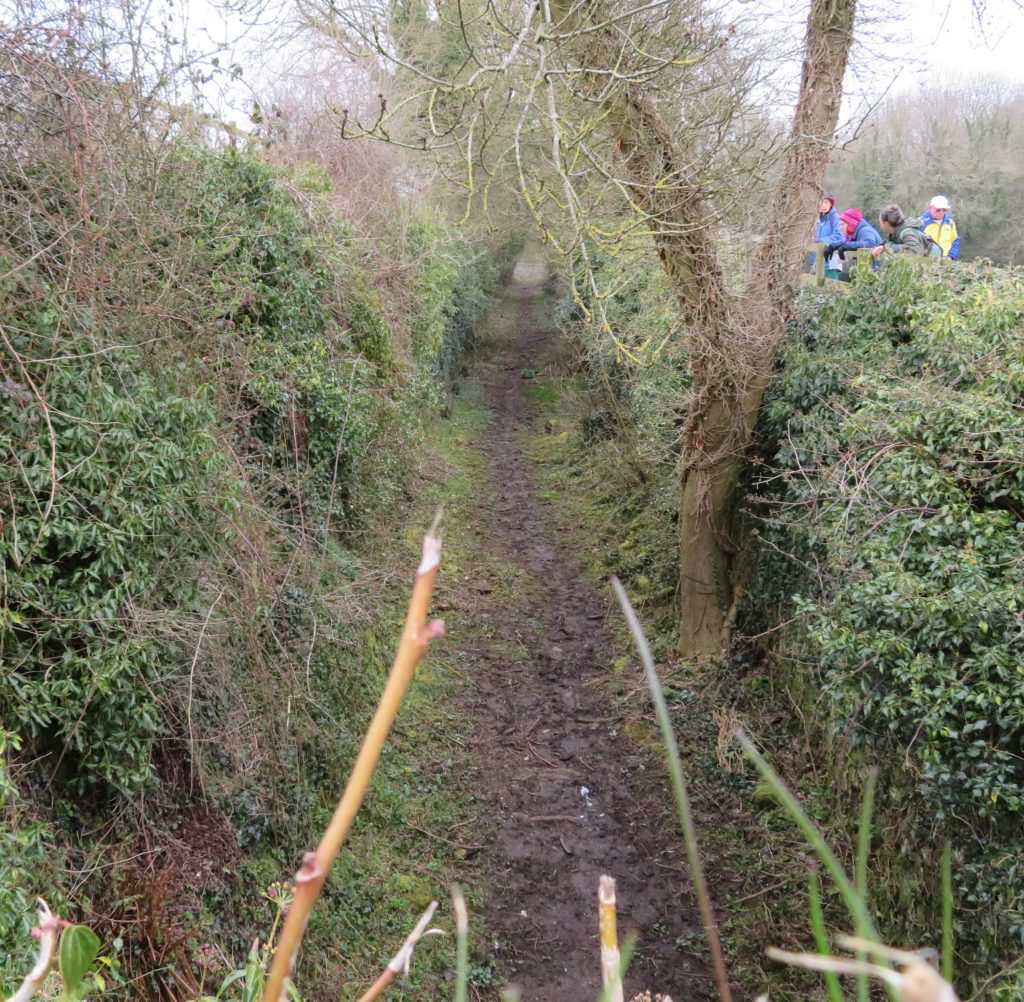 We could also see the old contour line following the line of the tramway. Crossing a stone bridge which crossed the later route we progressed to Fritchley and the world’s oldest railway tunnel. About 90ft long, the tunnel passes under the road. The portals are now buried but the north portal was opened up in 2013 for a survey to be done as part of the project. 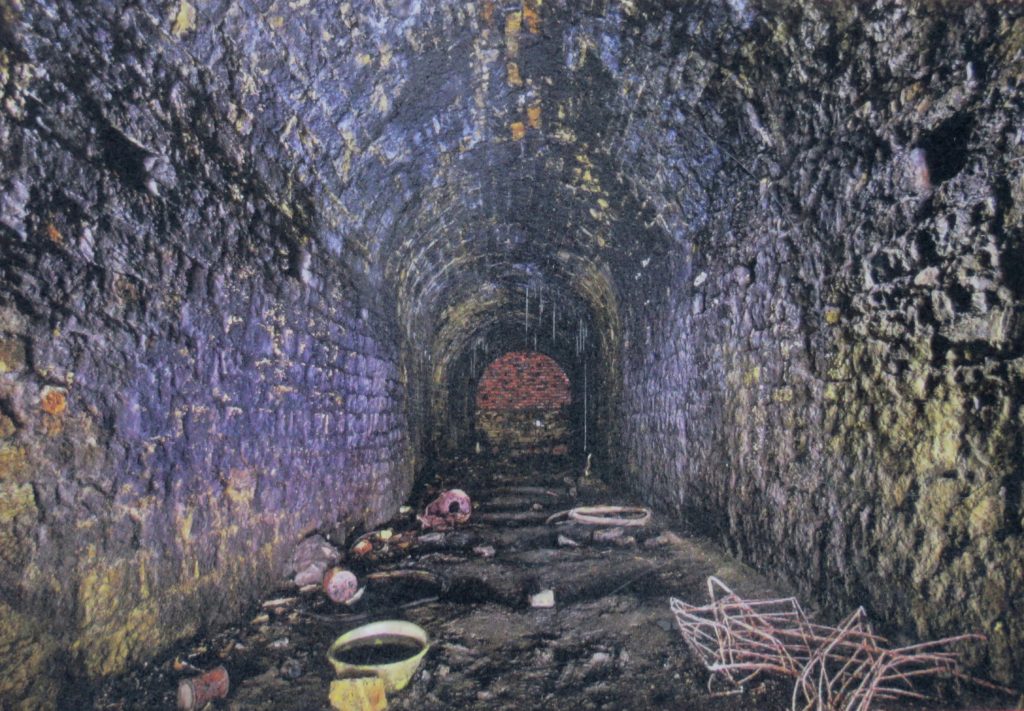 Photo taken inside the tunnel during the survey

At one side of the road a representation of the type of waggon that would have run on the line is situated close to the railway line and next to interpretation boards. 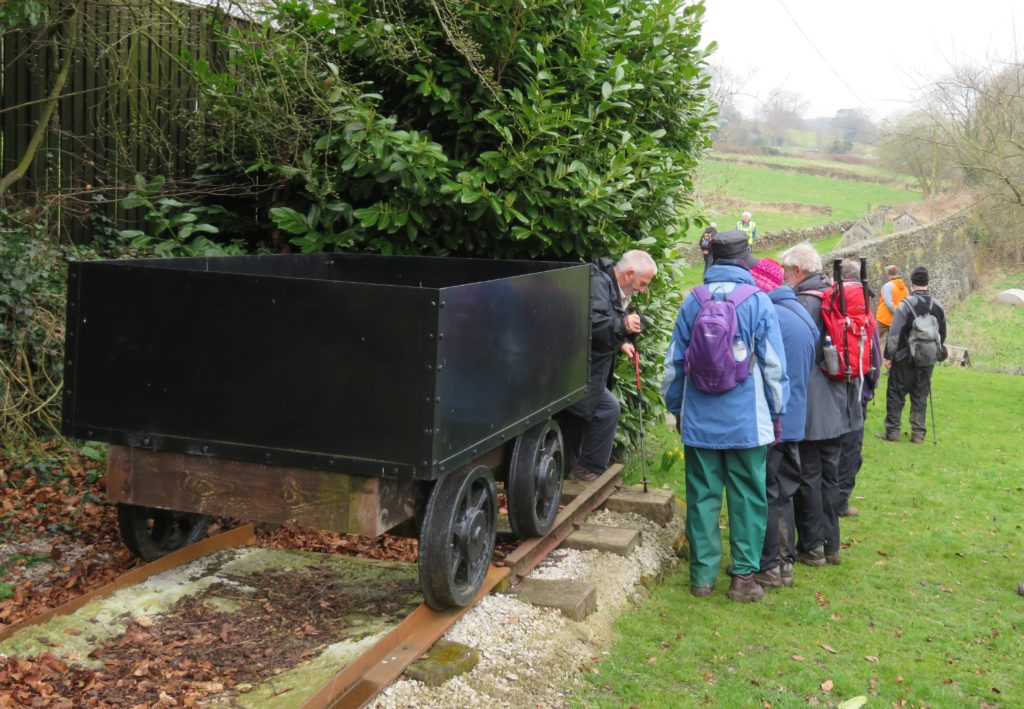 After passing the limework managers house, stables and yard we passed under a Butterley Ironworks bridge, heavily stabilised, which would have carried the railway into the limeworks yard at Bullbridge. Here the railway met the Cromford Canal at Amber Wharf and the burnt lime was loaded onto boats or rail wagons for transportation.

At this point Trevor left us and Hugh took over as guide to take us along the Cromford Canal to Butterley. From Bullbridge Wharf Bullbridge (or Amber) aqueduct took the canal across the Amber valley. 30’ high, it crossed the river, road and later the railway, surviving until 1968 when the road was widened and the aqueduct demolished. 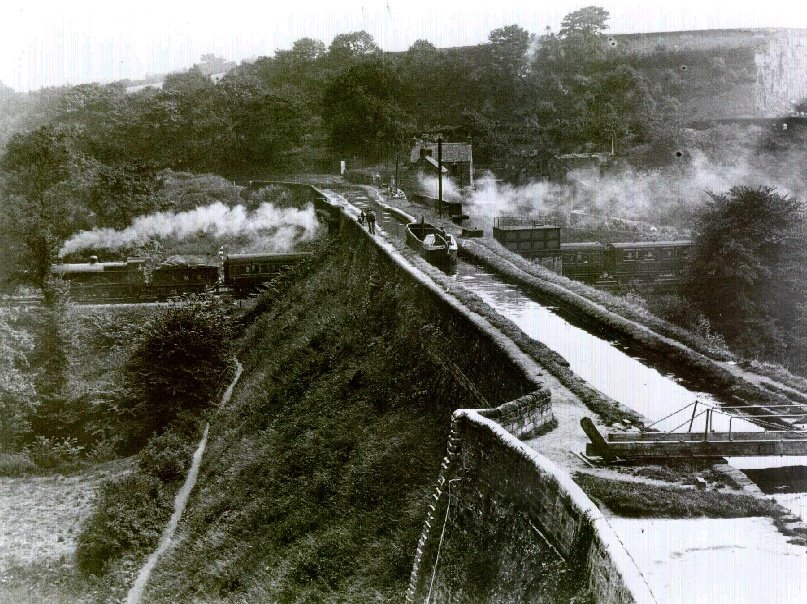 To join the canal we crossed the railway and then braved the A610, where Paul took his life and walking stick in hand to stop the traffic for us to cross. Immediately after the aqueduct the canal turned sharply; there is now a house on this site which has the original dry dock in it’s garden. Unfortunately there is also a high fence running across the canal. The canal runs on a high and very steep embankment here with houses along the bottom, making us wonder how residents would feel to have a canal full of water above them.

Next we reached a gauging narrow, which the society have been clearing. Originally a toll house stood here, the entrance gateposts remain. After Brickyard bridge there is a section of canal that was sold off piecemeal in the 1960’s to local home owners. This is now covered in allotments and cars. 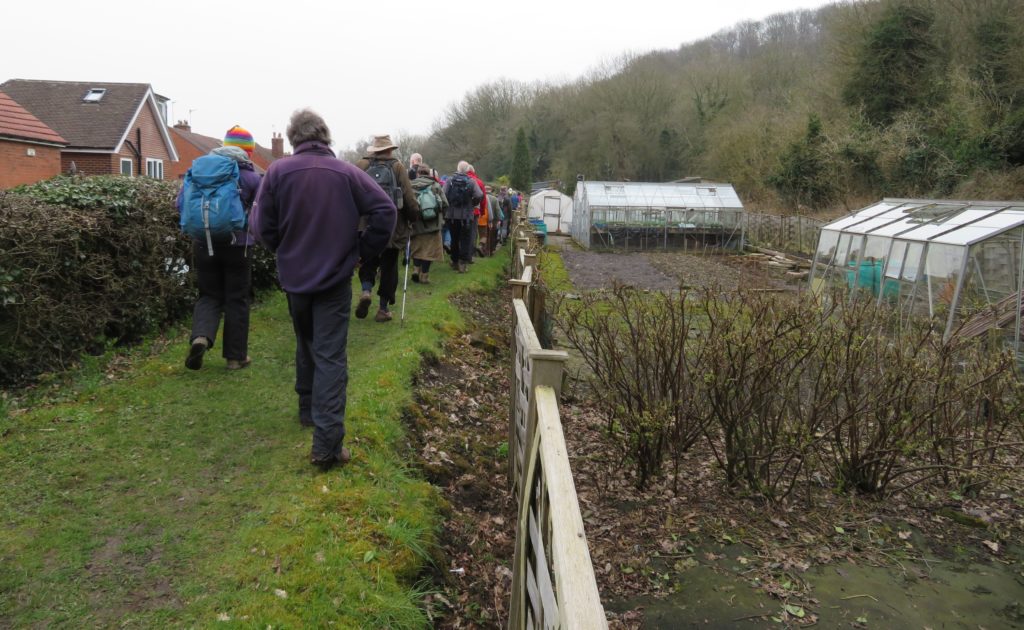 To the side of this is an old railway line which could provide an alternative restoration route, thus bypassing the problems that are foreseen in restoring the original route. After passing through Buckland Hollow tunnel, which, although the channel is infilled, appeared to be in good condition, we were all pleased to reach our lunch stop at The Excavator pub, formerly Ladybank House, the offices of G. Wheatcroft & Co, canal carriers, who had put on a delicious carvery for us.

Suitably replenished we set off for Butterley Tunnel. We soon reached a short section in water, although only because it is being used as a fishing lake, then saw the remains of a working boat embedded in the canal bed. 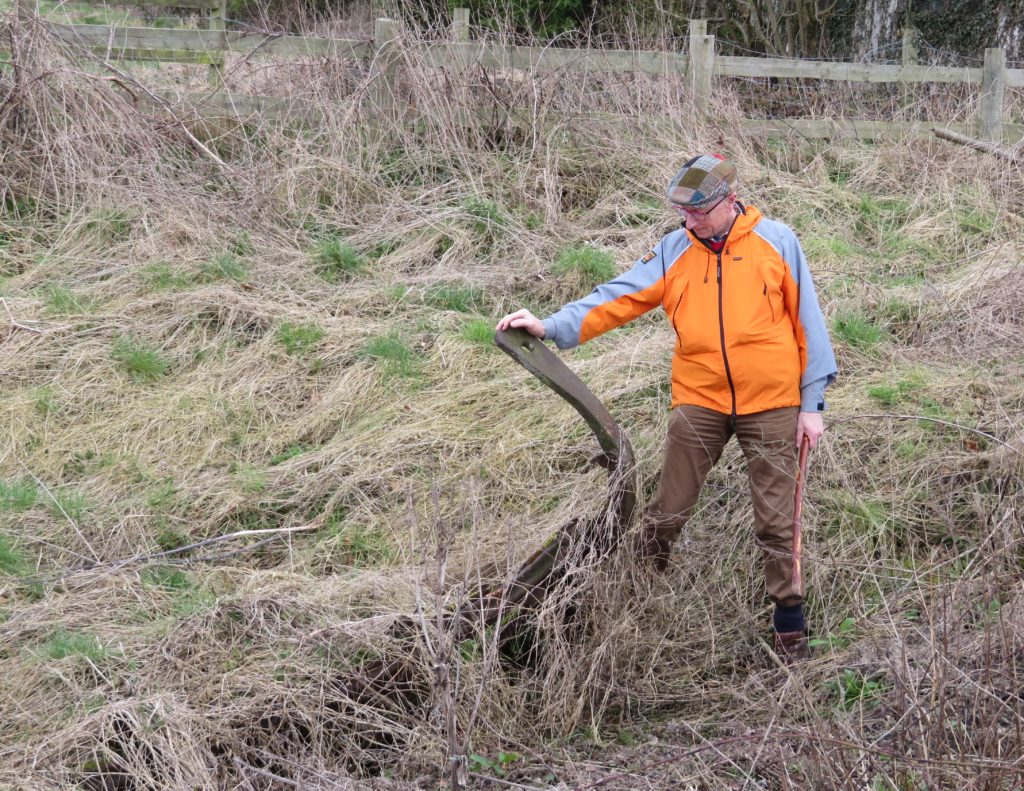 We followed the dry—ish intact canal bed to the entrance to Butterley tunnel, having scaled the heights of the A610! 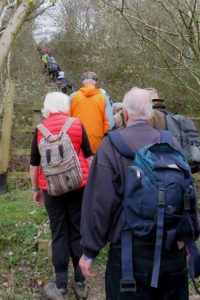 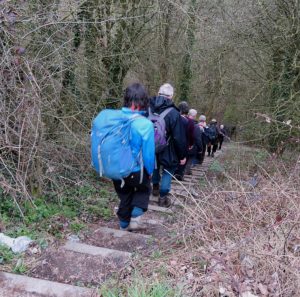 At 2,966 yards, at the time of building Butterley tunnel was the third longest canal tunnel in the World after Sapperton and Dudley. It has an underground wharf from where a horizontal tunnel ran to the Butterley Company’s Butterley Carr Pit which opened in 1812 and loaded its coal directly into narrow boats at the underground wharf. There were also vertical shafts from the wharf which allowed goods in tram boxes to be lowered directly from and lifted up to the Butterley Company’s works (on the hill above the tunnel) to and from the underground wharf. The tunnel suffered from subsidence and closed in 1900 thus splitting the canal into two separate sections. The tunnel was extended when the Ripley bypass was built, but with only a 5’ diameter section of corrugated steel. 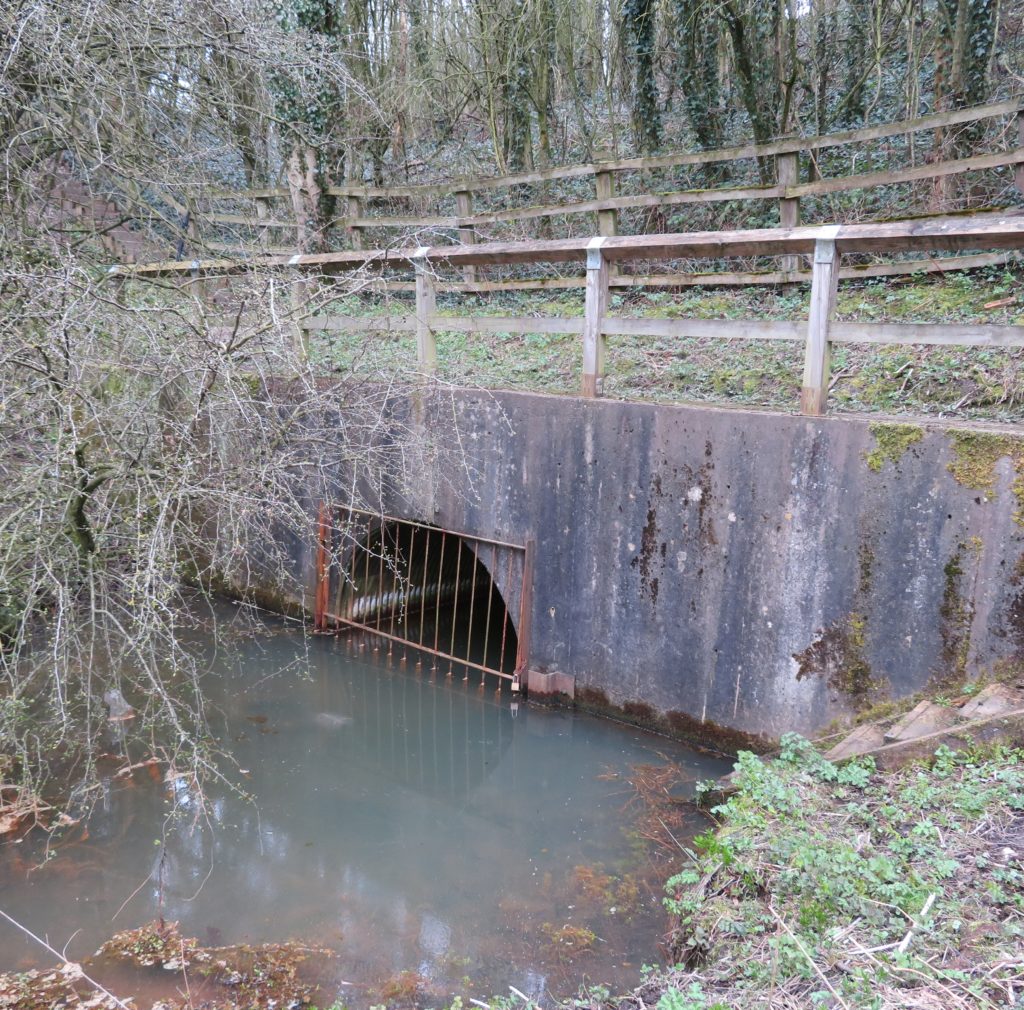 On the final part of the walk we visited the Midland Railway Centre station at Hammersmith and the Butterley reservoir. This was built by the Nottingham Canal Company and the water delivered there very conveniently via the Cromford Canal. We finished at the Midland Railway Centre’s Butterley station, from where it was a short bus journey or walk, past the remains of the Butterley Company works, back to Ripley. 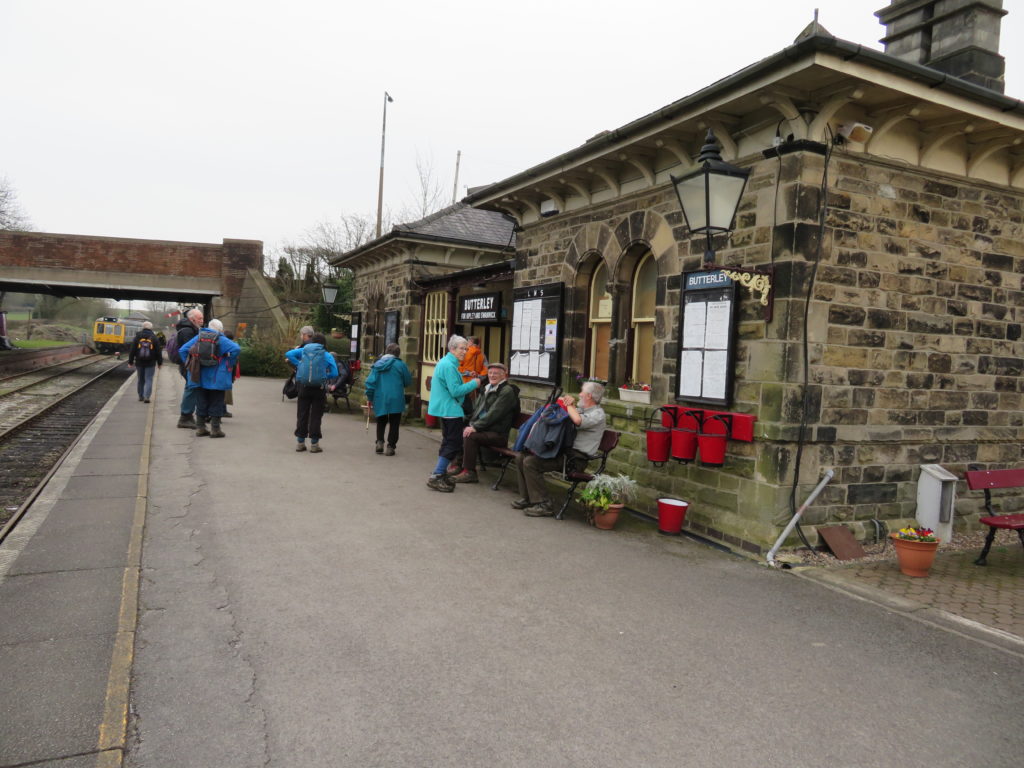 Many thanks to Hugh for organising such a varied and interesting walk and to Trevor for his excellent guidance along the Gangroad.

Postscript
Following the walk Hugh sent us the following article from 1959 which we thought would be of interest, particularly to those who had been on the walk:

The future of the Cromford Canal in the Ironville and Golden Valley areas was brought up for discussion, when a letter was read from the Inland Waterways Protection Society, an organisation which seeks to fully restore existing canals to navigable waterways, suggesting a “new cut” from Chesterfield to Pinxton Canal with a view to linking the canal system from Leeds to London.
A letter from the Clerk, Mr. H Taylor, was read in his absence, in which he pointed out that there were two alternative resolutions. The first being that of supporting the Inland Waterway Protection Society for the restoration of the Cromford and Pinxton Canals, and deferring the question of Oaks Row Bridge at Ironville. The other that the abandoned and derelict canal at Golden Valley and Ironville to be filled in and consideration of it’s ultimate use as a roadway.
Coun. Rimmington said that as the council had been notified of the decision by the British Transport Inland Waterways that the Cromford Canal had been abandoned, the council had decided that the hump bridge at Oak-es Row had to go because of it’s danger to motorists and mothers pushing prams.
Coun. Rev, Francis said that the canal was in a terrible condition, and that the bridge was a public danger.
Coun. Weston remarked that it was not a practical proposition to attempt to make use of the canal as a future waterway. “It leaks, the towpaths have gone, and the residents as a whole would recommend it’s closure”
Coun. Peacock suggested that the matter be deferred until the Council could hear the views of the Clerk. This proposition was carried, and the question was deferred until next Tuesday.