This was the second canal non-walk, as it has now been christened, that we’ve organised and it was great to see several retired walkers and welcome new members to the group.

The morning’s visit to the Lion Salt works was fascinating – who would have thought salt could be so interesting? After a welcome by museum staff we were given a brief history and explanation of the site before setting off to explore at our own pace.

Lion Salt works ran as a business from 1894 until 1984. It was built over an underground brine stream, formed where ground water has dissolved salt layers. The brine was pumped up to the salt works by a ‘nodding donkey’ driven by a steam engine. These are planned for restoration in the future.

The salt was then piped across the site to a holding tank and thence to the salt pans. During the restoration a tunnel under the site was found, running from the canal to the centre of the site which was so crowded with buildings this made moving coal from the canal much easier. Next on the tour is the original Red Lion Inn (from which the works takes it’s name), now filled with displays which take the visitor through 2000 years of salt-making, explain the ‘wiches’ of Cheshire and has a recreated office, bar and wallers hut.

After the Red Lion are the pan and stove houses. Pan house No3 shows what it would be like to work there (thankfully without the heat) and has images projected onto the wall and roof, creating an interesting display. 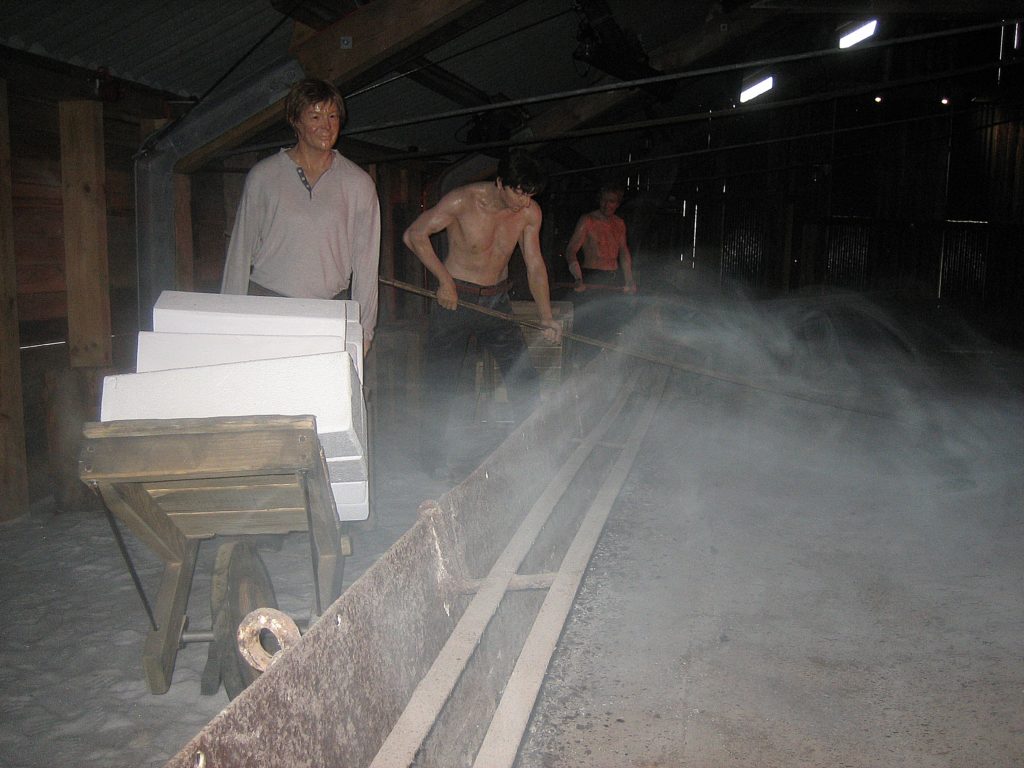 In the stove houses salt would be stacked to dry. Although a new framework supports the building it was good to see the old cast iron structure left in situ.

After this there are displays showing the processes of drying, cutting and packing the salt as well as interactive galleries, where the young at heart can have a play, plus illustrations of the impact the extraction of salt from underground had on the local area, causing subsidence and creating flashes.

Then onto present times – fascinating information about the restoration and how nature has reclaimed the ‘waste howling wilderness’ that had been damaged by pollution from industry – even flashes that were filled with industrial waste.

From here it is a short drive (or 2 mile walk) to the Anderton Boat Lift which had taken the salt boats down to the River Weaver. Here we had a very leisurely lunch and plenty of time to catch up with friends old and new as the trip had been delayed by a computer fault. Luckily by this time the weather was fine and warm and it was a very pleasant spot to wait overlooking the river.

The Edwin Clarke eventually descended the lift and we were finally able to board for a pleasant trip up the river to Northwich, passing Tata chemicals (formerly part of ICI), a sunken concrete boat, and the remains of a wharf now well hidden by reeds.

The boat returned to Anderton for the most exciting part of the day – ascending the lift. The lift never fails to impress and being in the trip boat we had the added benefit of a commentary explaining how the operation of the lift had changed from counter balanced hydraulic to electric with counterbalanced weights when the cast iron hydraulic rams corroded, accelerated by the action of the high salt concentration in the water. Now the lift has electrically powered hydraulic rams, which can be operated independently or counterbalanced. The rams now are made of stainless steel with a ceramic coating to protect from corrosion.

On reaching the top there is a wait while water is pumped between the caisson gate and the aqueduct gate. These are lifted for the boat to pass onto the aqueduct then lowered again before the gate at the canal end of the aqueduct can be lifted – a safety feature of the lift.

We had thought this would be our last non-walk but having been asked many times where next year’s is going to be it seems not!

Ideas on a postcard please.